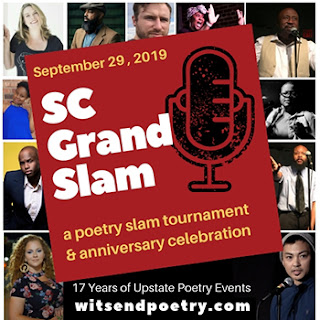 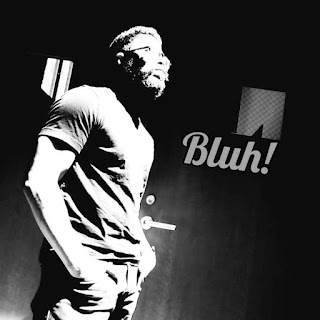 Performers to be announced soon. Wits End Poetry is the only nationally certified poetry slam in SC.
Join us for the longest-running poetry showcase in South Carolina, celebrating 17 years of exciting poetry programming since 2002. Wits End’s Say What Sundays Poetry Events are at Coffee Underground at 7:30 pm in Downtown Greenville every Sunday night. 1 E. Coffee Street. Featured poets and poetry slams plus our weekly open mic. All poetry styles welcome. Shows often sell out, so get their early or buy tickets at Eventbrite! http://witsendpoetry.eventbrite.com. Follow our social media @witsendpoetry across all platforms.
Produced by Wits End Poetry, these poetry events are made possible in part by the generous support of the South Carolina Arts Commission and the Metropolitan Arts Council with funds received from the City of Greenville, BMW Manufacturing Company, Michelin North America, Inc., SEW Eurodrive and the South Carolina Arts Commission. More information at www.witsendpoetry.com.

REGISTRATION FOR POETS IS OPEN!

All competitors subject to final approval by Wits End Poetry. Competitors should previously have participated in the Queen of the South, King of the South, Slammadness, Anniversary Slam, or other approved regional/national tournaments.  Or be nominated by a slammaster. Poets if you are interested in competing but are unsure if you qualify, please email witsendpoetrysc@gmail.com. Our monthly slams are open to all.


Tournament rules:
1. Prize Money: 1st $500  2nd $200 3rd $100
The winner gains the title: SC Grand Slam Champion
Top 3 poets will have the title, "SC Grand Slam Finalist"
2. Bout draw is at 7:15pm
If you are late for the draw, you will automatically be the 1st poet in the slam!
3. We are only taking 12 poets. No Waiting List. Cancellations must occur by 9/25 in order to receive a refund.
4. No Tie for First. In the event that there is a tie for first after the third round, then each poet tied for first will perform one additional poem. A coin flip will determine order. Judges will vote for the winner by writing down the name of the poet who they believe should win.
5. Three Round Poetry Slam. 12-6-3. First two rounds are cumulative. Final round is clean slate. Order will be high to low for second round. Final round will be redrawn for order.
6. The Time Limit. 3:00 minute time limit. At 3:10:01 a time penalty will be assessed.  A poet is certainly allowed several full seconds to adjust the microphone and get settled, but as soon as s/he makes a connection with the audience (“Hey look, she’s been standing there for 10 seconds and hasn’t even moved”), the timekeeper can start the clock. After 3:00 minutes, there is a 10-second grace period (for example: (in the 3 minute rotation) up to and including 3:10:00). Starting at one hundredth of a second over the grace period, a penalty is automatically deducted  of .10 from the poet’s overall score. THE MC/BM MAY STOP THE POET AT 4:00 MINUTES.
7. Influencing the Crowd Before the Bout Begins. Poets are allowed to talk casually with anyone in the crowd before the bout begins (except the judges, if they have already been chosen). They are not, however, allowed to give anything to the audience or have anyone do this for them. See full PSI
tournament rules for more information.
8. Kimberly Simms will adjudicate any disputes. Please see our page What is Slam for full rules as well as below.

Slam Rules
1) Poems can be on any subject and in any style.
2) Each poet must perform an original work that they have created.
3) No props. Generally, poets are allowed to use their given
environment and the accouterments it offers microphones, mic stands,
the stage itself, chairs on stage, a table or bar top, the aisle as long as
these accouterments are available to other competitors as well. The rule
concerning props is not intended to squelch the spontaneity,
unpredictability, or on-the-fly choreography that people love about the
slam; its intent is to keep the focus on the words rather than objects.
Refer to Section V (Definitions) for further clarification on what is and is
not a prop. Poets who inadvertently use a prop (for example, a timely yet
unwitting grab at a necklace) can be immediately penalized two points if
the MC of the bout deems the effect of the violation to have been
appreciable, but sufficiently lacking in specific intent. A formal protest
need not be lodged before the MC can penalize a poet in this way,
however, the decision of the MC can be appealed after the bout.
Individuals whose use of props in a poem appears to be more calculated
and the result of a specific intent to enhance, illustrate, underscore, or
otherwise augment the words of the poem will be given a retroactive
score for the poem equal to two points less than the lowest scoring
poem in that bout. This deduction, which can only be applied after a
formal protest has been lodged against the offending poet, will not be
made by the MC, but by the Protest Committee.
4) No musical instruments or pre-recorded music, a poem which
violates this rule will be assessed a score of zero.
5) No costumes. (Do not put on or take off clothing during bout)The Protest Committee may apply a two-point
deduction for violation of the costume rule. 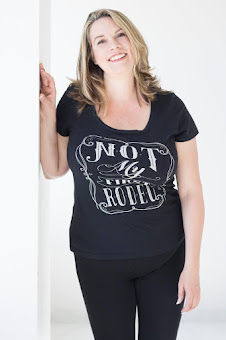